"The Subtle Nuances of My Gender Identity": An Interview with Matthew Grimes

Christian Bancroft: Describe some of the current projects you’re working on right now.

Matt Grimes: Most of my work lately has been acrylic paintings, and I try to always tie them back to an overall theme of gender and sexuality. Right now, I’m working on a project called “Contra Natura” Series where I explore concepts of gender and sexual identity and the influence of western colonialism. “Contra Natura” means “against nature” and is a medieval term to describe any sexual act that does not lead to procreation, insinuating that there are only two genders, woman and man, whose only purpose is to procreate. While this term is very old, I believe many of these old Christian ideologies still exist in dominant western culture. Much of my work right now questions those ideologies by representing trans bodies/experiences in my work and challenging dominant cultural misconceptions of gender identity.

CB: How have you seen your artistic practice grow over the time you’ve spent at Portland State University?

MG: At the beginning of my journey at Portland State, I had completely different intentions for my artistic career. I was convinced that I would work in animation and had moved to Portland in hopes of maybe working for animations productions like Laika. However, as I continued to write scripts and do character design, I got bored with the stories I was telling, mainly because they weren’t mine. I hadn’t seen my story as a queer trans-masculine person represented well (or at all) in any of the media I was consuming, and I was starving to see my narrative represented. Right now, painting is the best way I can show my thoughts and feelings about my identity, but I hope to show my story through more linear formats like writing. 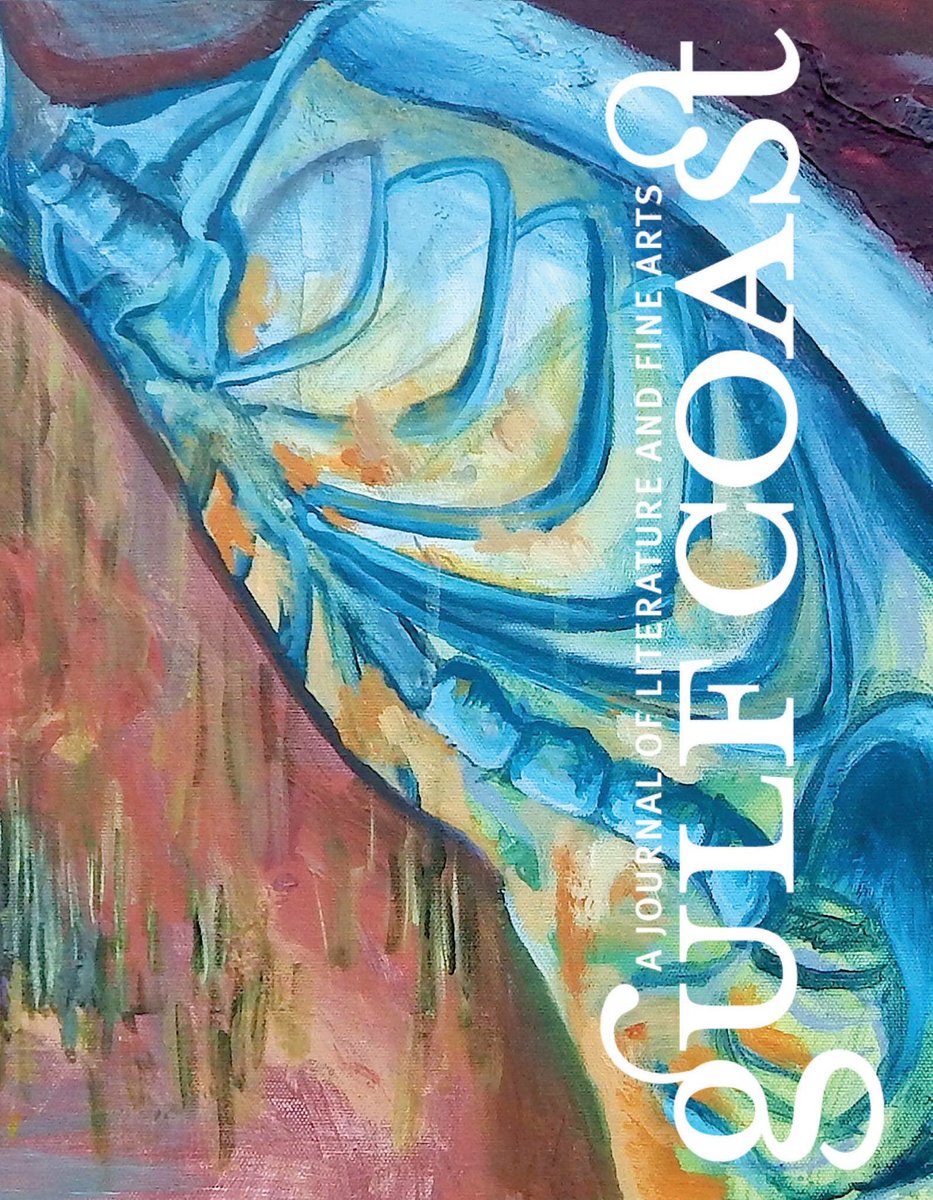 Above: The latest issue of Gulf Coast featuring artwork which Grimes created.

CB: Who are some influences on your art at this point in your career? Are there any contemporary artists you particularly admire right now?

MG: One of my favorite artists right now is James Kerry Marshall, who creates huge paintings that discuss issues of black identity and their representation in America. I draw a lot of inspiration from his art practice because he seeks to represent his own identity in his work. I also try to read and research trans history wherever I can grab it. At the moment I’m reading a book called Transgender Warriors: Making History from Joan of Arc to Dennis Rodman by Leslie Feinberg that shows, through a different lens, people in history that exhibit gender nonconformity which I use as a source to further push my narrative and artistic practice.

MG: I would say that I’m learning through my art to accept and love my gender identity more. I’m learning that many of the emotions and shame I feel are ideologies others have projected onto me that are based in transphobia and not through my lived experience. Looking at my pieces, I can see the pain I’ve experienced from having my body misgendered and not having the autonomy to self-identify. However, seeing that visually is very therapeutic for me because it allows me to recognize the pain and to grow from it, rather than pretend it was never there in the first place.

Above: "Untitled," by Matt Grimes

CB: In what ways do you feel a conceptual art practice can speak to sexual identities?

MG: Language often fails to accurately describe how complex my gender and sexual identity actually is. I can say that I’m trans and identify more near the “male” side of the spectrum, but that doesn’t even begin to reveal the subtle nuances of my gender identity and how I choose to express it. And it’s different for everyone. Painting- and art-making have allowed me to express aspects of my identity that we don’t necessarily have words for yet.

CB: What other marginalized communities do you see your art and your identity in conversation with? Why?

MG: I have learned a lot from the Black Lives Matter movement and their approach to continue fighting for racial equality. While I have struggled due to my trans identity, I have immense privilege from being white and I see how POC, especially trans women of color, who are disproportionately the most vulnerable to violence than any other marginalized identity. A continuing theme in my work is the decolonization of the mind and body, and explores how white supremacy has influenced our concepts of gender, while maintaining an understanding that I gain from white privilege even if I’m queer/trans.

CB: What kind of role do you think art can play in politics?

MG: Art is both an informer and creator of culture, so while I create my art in reaction to the current political climate and identity politics, I am also reminded how art is a recorder of history. My art will be a part of the archive of transgender history, a history that is finally being called attention to.

CB: What goals do you have for your artistic style?

MG: My goal ultimately is to find a way to use my artistic practice for activism and social change. I am starting the last year of my undergrad where I’ll be enrolled in the Bachelor Fine Arts program at Portland State University. I’m hoping I’ll receive the skills to navigate working with galleries in Portland and learning how to produce and sell work as a freelance artist with a focus in activism.